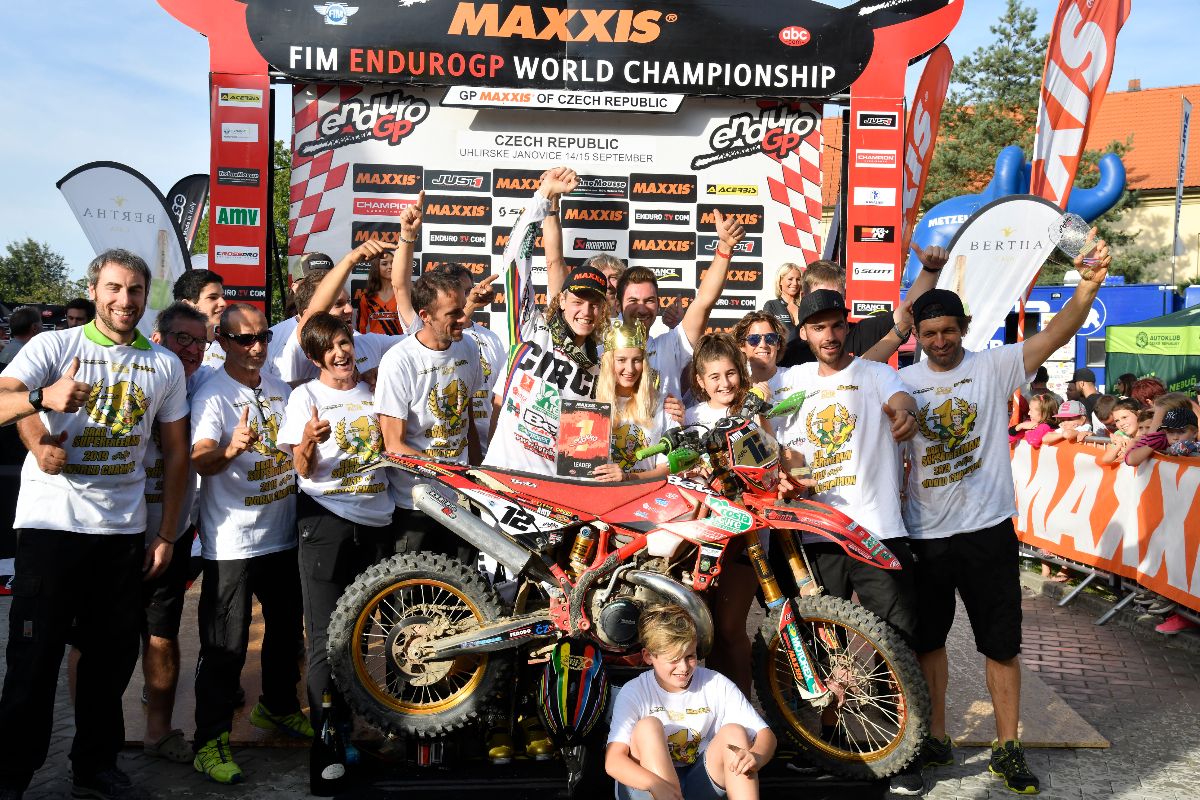 In racing, the winner is defined simply by who crosses the checkered flag first; nothing more, and nothing less. Behind these winning moments are massive amounts of hard work, the entire team’s efforts, and the raw talent of the competitor. No matter the sport or discipline, it’s only so often that a talent comes along that simply sets themselves apart from the rest. For team Beta Boano Racing Sport’s Brad Freeman, the British native has risen through the ranks these last few years and only just begun to carve his name in the Enduro GP’s record books. Winning every title he’s entered into with the team since signing, Brad’s recent 2019 World Enduro GP title not only launched the independent race team into the history books as the first non-factory outfit to win it all, but also culminated a lifetime of dreams into reality. And he’s not stopping anytime soon.

Like anything, securing the next champion in any discipline of racing is what every team manager or owner wants to do. For Beta Boano Racing Sport’s team owner Jarno Boano, being a retired racer lends him extra insight to finding and working with a special talent like Freeman. Of course, the opportunity with both parties was mutual. “When I joined this team in 2017, I wasn’t even racing in the world championship full time. So, when I came to this team for him [Jarno] it was a big risk and for me it was a massive opportunity to try and prove myself in the world championship. From the first moto I realized how much harder they worked as a team, and I didn’t even know how much I needed to train, or really any mechanics about the bike.” Brad went on, “When I raced as a privateer, I was working with purely just born talent and wasn’t riding anything crazy, and when I came to Boano Racing we just worked so much harder and were on the bike 3-4 times a week; it was just straight into a professional team. In the three years I’ve been with the team I think I’ve grown massively from where I was at the start, and that’s all thanks to them.”

When asked about helping cultivate the raw talent that Freeman has showcased, Jarno was quick to mention his work ethic and motivation at crucial moments over anything else, “He’s a really good guy, he has strong motivation, and has a really strong mindset during bad situations. He made things that looked impossible at the beginning of the year really nice and incredible in the end.” Rewarded with nothing but championship success since 2017, 2019’s World Enduro GP title was an absolute fight and something that Jarno and Boano Racing would have only dreamt of years ago. Yes, Brad’s second E1 class title was the initial goal, but when he began leading defending Enduro GP champ Steve Holcombe in the overall championship classification, the goals shifted toward not only the E1 title, but also breaking this new ground as a team and winning their first World Enduro GP overall.

Jarno’s aforementioned traits regarding Brad’s strong mindset define Freeman’s mid-season performance that saved his world championship run. True grit kicked in when Brad suffered a broken collarbone in Greece, and not only finished (and won) the race but competed in Italy a week later on a tough course with his collarbone still unrepaired. Jarno spoke of these trying times, “This victory is something that’s really crazy when I think about it, because the Italian GP is really tough. Many riders stopped because it was so hard, but he made it. The day after he had surgery and got a plate and screws installed.” His surgery and the hard work put in during the series break allowed Freeman to get back to form and continue his storybook year. “If he would have stopped for Italy the world GP title wouldn’t have been possible.” Jarno summarized, with a mixed tone of relief and disbelief that it all worked out.

Freeman is a rider that always understands and shows his appreciation to the importance of his team, the motorcycle, and the hard work behind it. “The days of Enduro are long, and you have to be fast for 5, 6, sometimes 7 hours. If you want to win at this level, the first thing is to finish the race.” Brad went on, “You have to finish with your bike in good condition, so you have to be a smart rider but the bike also can’t have a mechanical. The mechanics and race team are so important to the rider and the bike.” With Jarno and Boano Racing’s experience, team, and collective sponsors, they’ve all come together to provide their riders with a bike that has now done the ultimate task: beating every factory team in Enduro. Simply put, Freeman’s Boano Racing Beta RR 250 2T race machine is now a bike etched into the history books forever.

Brand relationships are the backbone of the team and its race bikes, and Jarno described their relationship with ProX and the importance of every detail. “We have many sponsors, and two years ago we began to work with ProX.  We use their rear sprockets, piston, and clutch. The materials are really good, and these products ensure that we have a safe bike as well.” Jarno continued, “For enduro, the less problems you have with your bike the better. You don’t have much time to fix the bike if something breaks. I am really grateful that Brad understands that it is not only him racing. It’s the rider, the bike, the mechanics, the team, and for the entire three years he’s raced with us we have never had a single problem with the bike. Obviously he’s responsible to bring the bike to the top, but without the bike finishing this is not possible.”

Get tips on how to change your chain and sprockets, and see more technical details on ProX chains here.

For Boano Racing, a sponsorship like ProX means much more than just a parts agreement, as Jarno explained, “We met they guys from ProX and they believed in what we were doing and saw some of the work we had already done. We helped ProX develop some of the parts for the 2018 Beta, like the new piston for the new 2018 bike, and also helped ensure all of the parts will fit on the 2018 bike. It’s the kind of cooperation that continues much further than the race. It’s not just sponsoring us by giving products, they ask our opinion and develop new products from our feedback. This has been really nice to have a famous company like ProX develop new parts with us and grow our partnership further.” With all his proud sponsors and his good relationship with the factory Beta race team, Jarno’s balance of working with Beta yet trying to beat them on the weekend is certainly a fine one.

Check out more on ProX's Beta parts here, and get all the technical info on ProX 2-stroke pistons here.

One has to ask, where do you go from the top? As expected, Jarno still has a hint of disbelief when discussing the team and Brad’s success, “You have to remember that in 2016 he won the Junior championship, in 2017 he won the junior world championship, in 2018 he won the E1, and in 2019 he won the E1 and the overall Enduro GP championship. Every championship that he’s entered, he has won. I don’t remember any other rider that this has happened with. We’re going to need some time to really realize what we’ve accomplished this year.”

Brad is indeed a special talent, one that Jarno understands doesn’t show up with the snap of a finger. The potential for him to graduate to factory Beta racing is high, and something that Jarno also recognizes and has seen before, “My job is to try to sign young riders and help them to grow up.  When the rider believes in us, we can together show that the rider is capable of winning. Before Brad, we had Steve Holcombe, Danny McCanney, and more, who we helped to arrive to the top.”

When Brad made the leap and moved to Italy to pursue this team opportunity and go all-in, he reflected and spoke of the transformation, “When I first joined the team I think I really wasn’t ready to win, and I think that’s a big change in your mindset. These last three years with the team have not only helped me progress as a rider, but have given me the belief that I can win. When you show up to the races and believe you can win it’s a completely different thing.” The success of 2019 is a testament to confidence, hard work, and all of Boano Racing’s efforts. Will Jarno be able to find another Brad Freeman in the future and replicate this level of success? That’s to be discovered, but it is certain that the collective Enduro GP community and world’s respect has been earned as Boano Racing and Brad Freeman close the chapter on a 2019 season that they once only dreamed of.

Brad summarized, “When I first joined the team, it was purely a junior team for the younger kids under 23, and through the three years we’ve both grown up and now we were a team ready to win the overall world championship. It’s a good story. All of the factory teams are on a completely different budget to what we’re on, and we are the first completely private team to win the world championship. It’s crazy to think about. The Boano racing team is more than just a team, it’s a family.” There are certainly going to be riders lining up for the opportunity to work with a team of this caliber and a bike this capable, and the future looks bright for this Italian outfit.