It was a night of mixed emotions in Nashville for the Pro Circuit Race Team, but Martin Davalos was happy to celebrate his first victory of the season. ProX recaps Davalos' victory and Austin Forkner's current status looking toward the end of the season.

NASHVILLE (April 9, 2019) – As the Roman philosopher Seneca the Younger said long ago, “Luck is when preparation meets opportunity.”

After his teammate and Eastern Regional 250SX Class points leader Austin Forkner went down and was sidleined with an injury he sustained in practice earlier in the day, it was up to Martin Davalos to shoulder the weight for Pro Circuit and to minimize the damage to his teammate’s point lead. 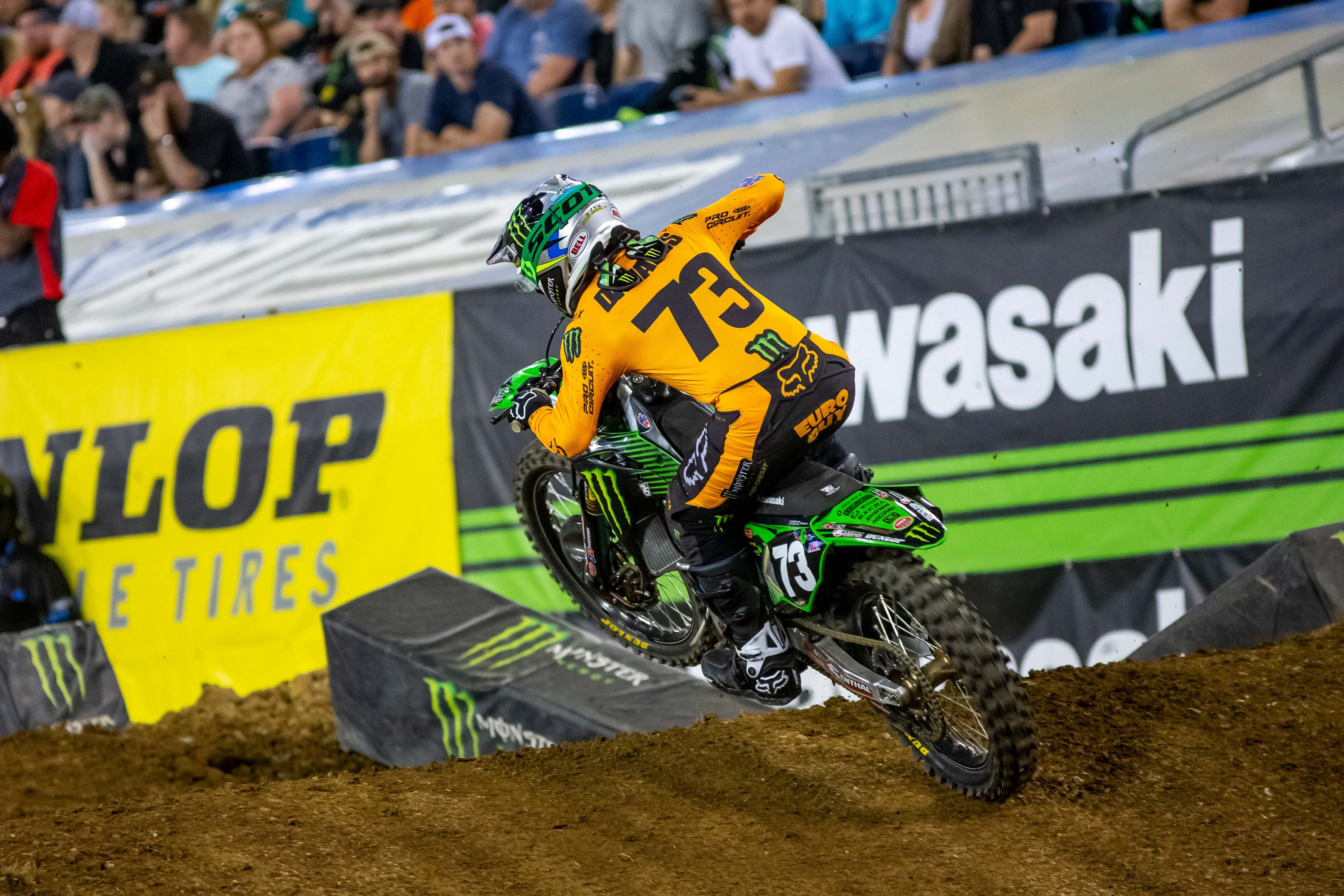 Davalos, a savy 32-year-old veteran, was up to the challenge and rode a smart, clean race to collect his fifth-career 250SX Class victory. The rider of the ProX-sponsored No. 73 Kawasaki KX250, who also picked up his first heat race win of the year earlier in the day, hung with the top five out of the starting gate and when the top two got together, taking themselves out of contention, Davalos took over the point and never looked back.

The Tallahasee, Fla., resident and native Ecudorian led all 19 laps and took home top honors with a little more than three seconds to spare. Davalos is currently fourth in points after picking up one spot in the standings following the win.

“It has been a long road to get back here with my neck and knee injuries last year,” commented Davalos, who spent most of 2018 recovering from injuries suffered at a trio of races (Anaheim, Atlanta and Saint Louis). “The journey has not been easy, so to be up here (on the podium) tonight just means the world to me. My Monster Energy/Pro Circuit/Kawasaki KX 250 was ripping all night. Some of my competitors decided to take each other out in the main event, which left me with a clear track to do my thing and I just rode a consistent race from start to finish.”

While Davalos was confident in his riding and his ability to close out his fifth-career victory, he still made his mechanic, Kyle Defoe, a little nervous in the waning moments after rolling his way through the demanding whoop section before taking the checkered flag.

“Everyone is talking about that,” explained Davalos. “The whoops were sketchy. It was a challenge to hit them just right every lap, and I like that. It was technical for all of us. I was managing my gap and I saw Chase (Sexton) moved up to second. I saw the white flag and I knew there wasn’t any reason to risk it. When I won my first race in Atlanta, I almost crashed on the last lap so I was like ‘I can’t do that’ so I rolled it and my mechanic was freaking out. When I came off the track he was like dude, you almost got passed. I’m like ‘calm down dude’ (laughs). So, it was alright.”

Unfortunately, much of the day’s conversation centered around Forkner, who went down earlier in the afternoon after losing the handle on his machine during the first 250SX Class timed practice. As of press time, the extent of Forkner’s injuries had yet to be revealed, but the rider of the No. 24 Kawasaki was on crutches and in the pits when the starting gate dropped for the main event.

While the Richards, Mo., native was out for the night, he still holds a three-point advantage with two races left to determine a champion. 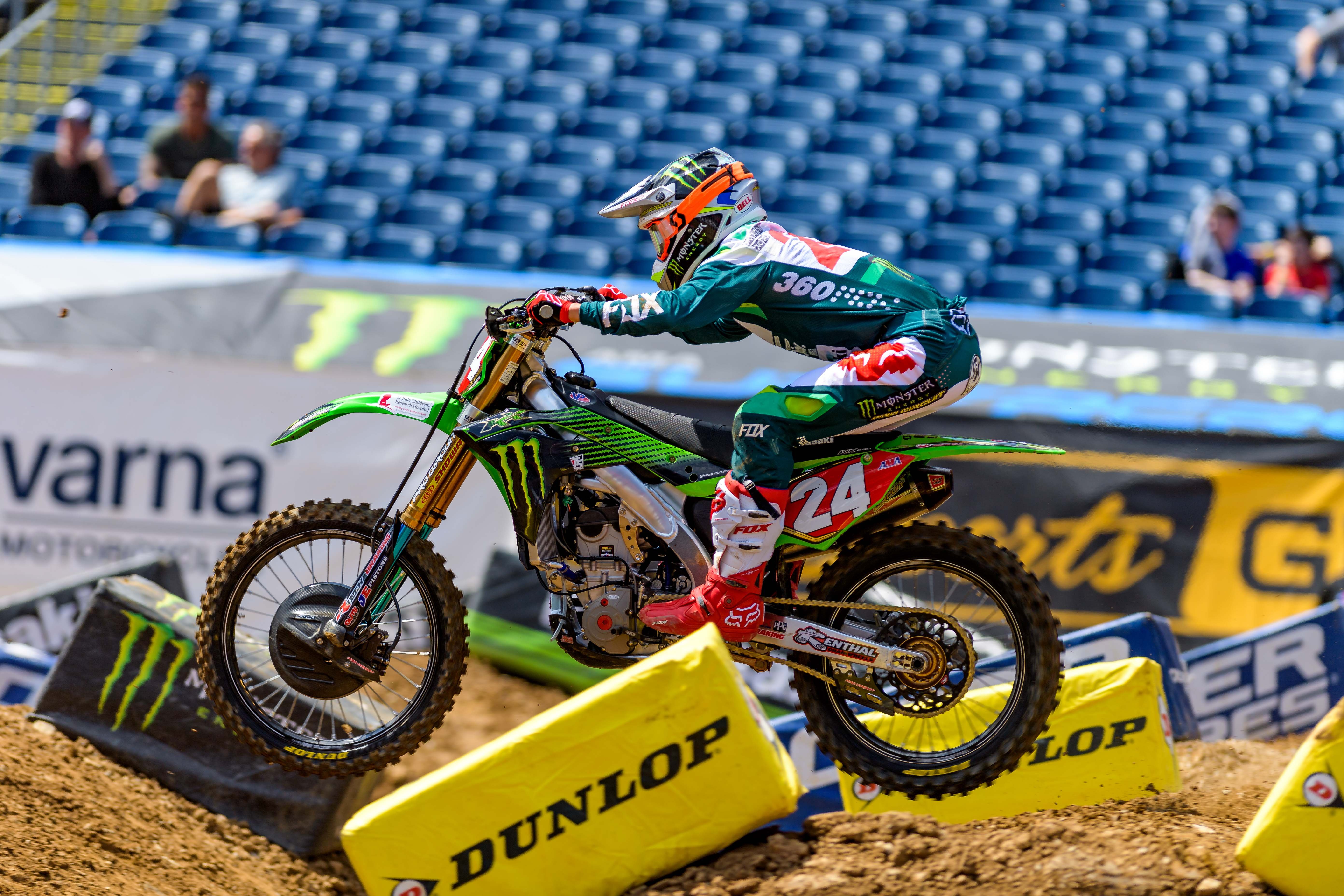 “I am absolutely gutted right now,” lamented Forkner. “I should have been out there racing, but a mistake in practice caused me to crash. We tried to give it a go in the third practice and everything felt fine until I over jumped one of the sections, which aggravated the issue. We still are chasing the championship and the team and I decided to play it safe and take the night off to make sure I am ready to go for the last two rounds.”

Monster Energy AMA Supercross heads for the Mile High City this weekend where the series will wrap up a 15-week swing that began in January in Anaheim, Calif. The 15th of 17 races on the 2019 supercross championship calendar will be televised live on NBCSN Saturday, April 13 beginning at 8:30 p.m. Eastern Daylight Time, 5:30 p.m. Pacific.