Burns: When we started off with Brian Deegan and Brian Swink, I was blown away. We had a two-time 125 Supercross Champion in Brian Swink. It was an honor. Those two ended up being such a perfect fit for what we had envisioned starting out. It was incredible to have those kinds of riders on the team. As the team grew, we kept getting all of these incredible big-named riders. It's hard to recall everyone ‘cause there was so many, but Travis Preston, Phil Lawrence, Kelly Smith, Nick Wey, Damon Huffman, Tim Ferry, Larry Ward, Kelly Smith, Kyle Lewis, Mike Metzger Etc...the list goes on. Every year, we always seemed to be the last to get our team together. We had the guys who were searching for a ride at the eleventh hour, like they were getting picked last on the kick-ball team. However, we always ended up with these amazing riders. We somehow kept proving ourselves. We were there to stay and we had a sh** load of awesome guys come through our team. And the number 1 Women’s MX Champion, Jessica Patterson, too. We were the first to give her an official ride.

At one point the team name was changed to Moto X3. Why?

Burns: Kurt Haller and some of the guys wanted to start becoming more of a professional race team and thought maybe our name was holding us back. There was a point when Nick Wey was on the team when Kurt decided that we would call the team Moto X3. It was depressing to me, because I thought we were wimping out. But Kurt felt maybe the new name would be more "sponsor friendly" Well, the new name never got us any more sponsors. I was bummed, because I liked the name and all the antics. I was causing drama, and that’s what I thought the fans loved about us.

Burns: Larry Ward won a National for us. He was the first guy to beat [James] Bubba Stewart for an overall on a four-stroke. Larry went 2-2 and won the RedBud National. We won a Supercross race and a National. We were this little team that came from nowhere. Later, we had riders like Tim Ferry and Damon Huffman. Damon was one of the first riders we ever filmed with for Moto XXX 1. We never dreamed that Huffman would ride for our team, though, we never even dreamed that we would have a team! Kyle Lewis was the holeshot king, so that always got us a lot of attention too. When you look at the complete list of everyone that came through our camp, it’s pretty impressive. Again, being noted as “the most successful privateer team ever” was such an amazing compliment, and I think it still holds true. Ya know, we didn’t line our pockets with cash, we gave it all back to the industry. I have no regrets!

Do you still see the anti-corporate vibe in racing, or is it completely gone?

Burns: No. Most of the personalities are pretty dry. Look at Jason Lawrence, Travis Preston, or even Travis Pastrana. These guys had character and charisma. They were good on the microphone and not robotic. I don’t know if the new generation is taught to be like that, but I don’t like it. Every interview you see with these guys seems almost scripted. There’s no emotion. I’m not ‘Mr. Excitement,’ but the interviews are stale. I remember the days of Bubba Stewart winning and doing the Sprinkler dance. I thought it was awesome. Whether you liked it or thought he was insane, it showed emotion. I remember when Stewart came out dressed as Rick James. He was screwing around. It’s like the old days of Tyler Evans.... can you picture Blake Baggett ripping his shirt off and acting all crazy? Jason Lawrence brought so much excitement and drama to the scene, he is a f****n legend and my dream is to have him back at the races in a Moto XXX box van, at any capacity at all. His is without a doubt, one of the most talked about SX racers. I was, and still am, a HUGE fan of JLaw!

Did you encourage your riders to stir things up?

Burns: I once remember asking Tim Ferry to take his shirt off and get the crowd going. He looked at me, like, ‘What are you talking about?” It was pretty funny [laughter]. Then we would have someone like Josh Summey, who was all tattooed out and looked gnarly, but he was really quiet. I always tried to razz him. I’d like to get back into a little bit of bringing spice into the pits, but I suppose we'd need to some riders and a presence in the pits first. I’m trying to do some stuff with these new school kids Braap Vlogs, BM_Fatty and crkilla607...they can wheelie like crazy and yup, it's just outside the box thinking! Gotta connect with the youth.

Burns: Absolutely, it a great feeling to know that Moto XXX still has a lot of supporters out there! It's great that we are still rolling, and I’ve got some dreams still. I recently found the original Moto XXX box van. My old partner Kurt sold it long, long ago, so, it’s been out of our hands forever. Well, it’s in great shape. The paint job on it is still in great condition. I had heard from a few people that they saw the box van frequenting swap meets in the San Pedro, California area. A guy direct messaged me a picture of the box van on Instagram, and I asked him where I could find it. He gave me an address, and one day I decided to see if I could find it. I rolled into a bit of a rough neighborhood, pulled around a corner and there it was. Our original box van! I got goosebumps. I didn’t know what to do. I looked at the box van, and the paint job is still great. Some of the same stickers are still on there. I thought to myself, ‘It’s sad that this piece of our history is being used to go to swap meets.’ I want it back. (Anyone want to help with a GoFundMe program? Send a DM on our Instagram).

Burns: The money was certainly not the reason why we did what we did. If we did it for the money, then we would have gone say the ‘Crusty’ route. Instead, we ended up giving our money back to the sport. All 3 of us had to take actual money out of our pockets to keep sh** going! We supported riders and the people who worked for us. I wouldn’t take anything back, because there were some really good times. I still feel like we have a good name. It’s figuring out how to get the youth on board and getting them to connect with us. It can be done!

Burns: I’d say to continue to grow the brand and receive the loyal support of the fans we have as well as making lots of new ones. To have a team out there again would rule, but again, it would be a box van and a rider, not a semi-truck for us. We did 13 years of charity giving back to the sport. But yeah, showing up at A1 would rule. Just takes a bunch of money, what the world revolves around, right? If you manage to get any sort of big corporate sponsors, you typically have to play by their rules.

In speaking of that, I’d like to mention one of the original Moto XXX team riders, Brian Swink, who just recently passed away. He was a great friend of mine, just had a lot of demons, as we all do. Anyhow, He never wanted to bow down to sponsors and really enjoyed the freedom he had on our team. He retired in 1997 after several injuries plagued him and he had had enough. After retiring, it was unfortunate the route he took, but he was a very stubborn son of a gun and did things his own way. The guy was a complete legend on a motorcycle and is touted to be one of the fasted 80cc riders ever! Brian was a big hearted good guy. I ended up seeing Brian in person in 2016. We had a really good time catching up. I was crushed with his passing. I flew to Florida for his funeral service and hung out with people I hadn’t seen in a while, like Gene Neumac, Anthony Pagio and Jeff Glass. It’s a bummer when death is what reunites people. I had a last moment with Swink in the funeral home. I got teary-eyed, and then I left and things felt so final. Anyhow, I’m putting together a dedication video for Swink that's going to be very cool. 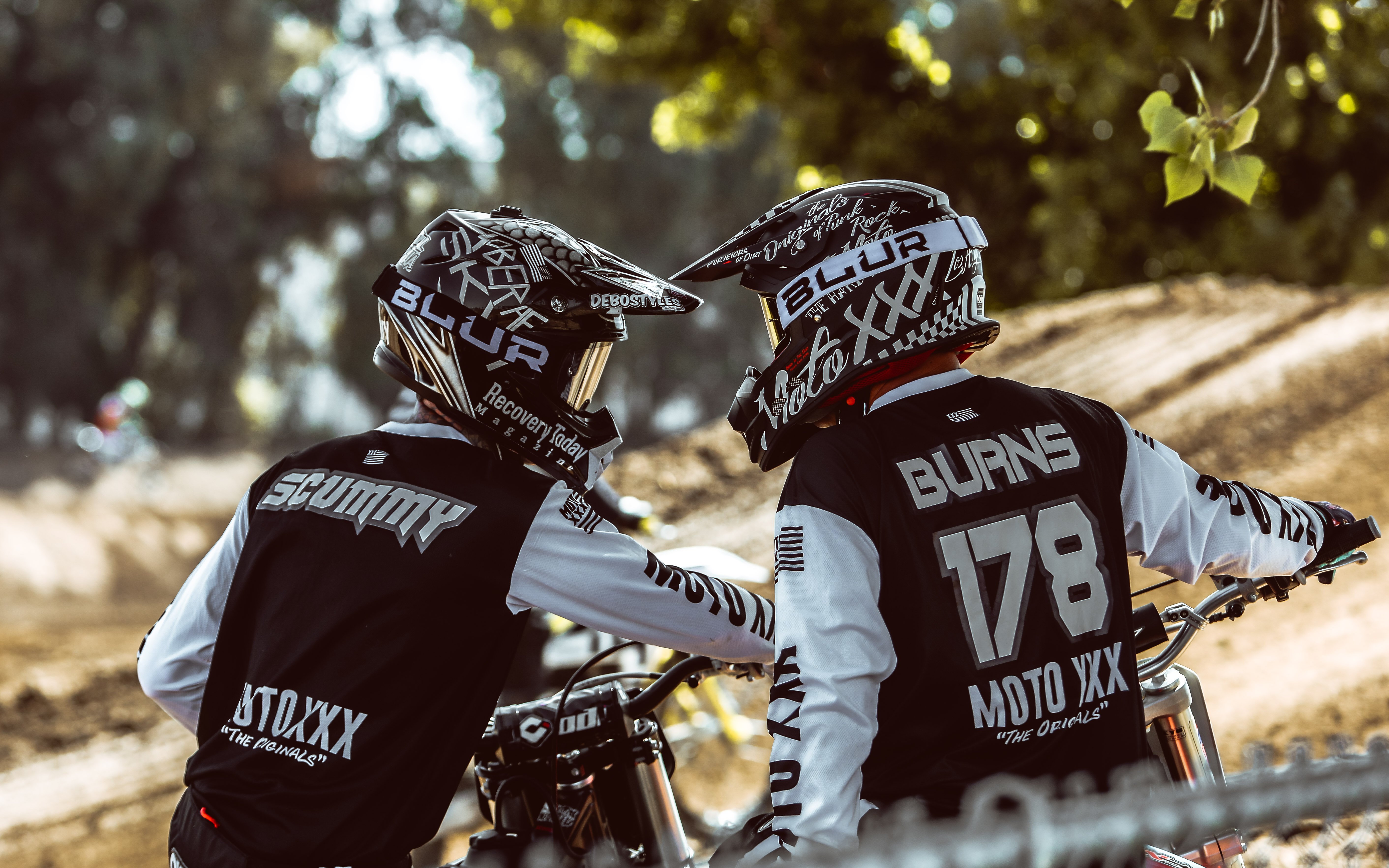 When does the tribute come out?

Lastly, Pulp MX covered the Moto XXX’s rise to power in a very well written article several years ago. That was quite a read.

Photos credited to Pulp MX were sourced with permission from: http://pulpmx.com/2014/07/24/moto-xxx-the-complete-oral-history/